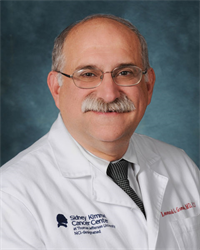 Dr. Leonard Gomella is the Bernard W. Godwin, Jr. Professor of Prostate Cancer and Chairman of the Department of Urology at the Sidney Kimmel Medical College. Originally from New York, Dr. Gomella completed medical school, general surgery and urology training at the University of Kentucky in Lexington.  After a Urologic Oncology Fellowship in the Surgery Branch of the NCI in Bethesda, Maryland, he joined the Jefferson faculty in 1988 and was appointed Chair in 2002. He serves as Senior Director for Clinical Affairs for the Sidney Kimmel Cancer at Jefferson. From 1998 until 2020 he was Urology Chair for RTOG (now NRG) and from 2008 until 2019 he was Clinical Director of the Sidney Kimmel Cancer Center Network.

Dr. Gomella is involved in translational basic science and clinical research developing new diagnostic tests and treatments for prostate, bladder and kidney cancer through the Sidney Kimmel Cancer Center where he has served as the Co-Leader of the Biology of Prostate Cancer Program. In 1992 Dr. Gomella's team was first to use molecular techniques (RT-PCR) to detect circulating prostate cancer micrometastasis. This is the first report of a prostate cancer “liquid biopsy” with the discovery leading to a new field of investigation in this disease. Dr. Gomella is also recognized as an early contributor to urologic laparoscopy, starting Jefferson’s program in 1990. He led the Urology effort in the 2017 and 2019 Philadelphia Prostate Cancer Consensus that provided the first multidisciplinary guidance on the genetic testing for prostate cancer.

He has given over 600 presentations nationally and internationally and written over 500 papers, chapters and monographs in the field of Urology. Journal appointments have included the Editorial Board of the Investigative Section of the “Journal of Urology”, co-editor in chief of "Techniques in Urology”, and on the boards of "Urologic Oncology", “Clinical Genitourinary Cancer” and "American Journal of Pathology". He is a consultant to over 2 dozen journals in the field of urology and oncology and in 2010 became Editor-in-Chief of the “Canadian Journal of Urology International”.

Dr. Gomella has authored and edited 63 editions of 17 different books for medical students, residents, and practicing physicians, many of which have been translated into foreign languages.  He is the Editor-in-Chief of the “5 Minute Urology Consult” now in its 3rd edition, laparoscopy editor for 2 editions of “Glenn’s Urologic Surgery” and co-author of the "Oxford American Handbook of Urology". "Recovering from Prostate Cancer”, the first book for the public dedicated to prostate cancer, was authored by Dr. Gomella in 1993. In the field of medicine, he is well known for the "Clinician's Pocket Reference" with the  2022 12th edition renamed “Gomella and Haist’s Clinician’s Pocket Reference”.

“Best Doctors in America”, “Top Doctors for Cancer”, Philadelphia Magazine’s “Top Doctors” have recognized him for many years for urologic oncology and prostate cancer including a 2015 national recognition in Newsweek. In 2007, Men’s Health Magazine listed Dr. Gomella as one of the 20 top urologists in the US. Awards have included the American Cancer Society "Volunteer Achievement Award" and an “NCI Achievement Award”.  He has been President of the Mid-Atlantic Section of the AUA and elected to the American Association of Genitourinary Surgeons and the prestigious Clinical Society of Genitourinary Surgeons. The University of Kentucky College of Medicine awarded him the "Distinguished Alumnus Award” in 2009. In 2015 he became President of the Society of Urologic Oncology. Also in 2015 he received a “Distinguished Contribution Award” from the AUA and Jefferson honored him with the “Jefferson Achievement Award in Medicine”. At the 2018 AUA meeting in San Francisco the Society of Urologic Oncology presented him with a “Distinguished Service Award”. In 2019 Dr. Gomella was named Enterprise Urology Vice President for Jefferson Health.

Return to Genetic Testing in Prostate Cancer: Clinical Implications for Early Detection and Management of Localized and Advanced Disease Webcast (2022)