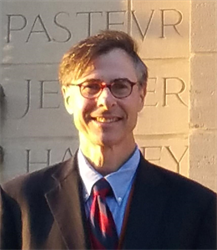 Jeffrey P. Weiss MD, PhD, FACS is Professor and Chair in the Department of Urology at SUNY Downstate Health Sciences University in Brooklyn, NY. Dr. Weiss received an AB in Biochemistry from Cornell University and graduated from the University of Pittsburgh School of Medicine (Alpha Omega Alpha) in 1978. After a general surgery internship and residency at the University of Pennsylvania during which time he served as housestaff president, he completed his urology residency at the same institution in 1984. Thereafter, he did a fellowship in Neurology and Urodynamics under the tutelage of Dr. Jerry G. Blaivas. Dr. Weiss is the primary author of over 400 peer reviewed scientific articles, abstracts and book chapters as well as co-author of 5 urological textbooks, including lead editor of "Nocturia: Causes, Consequences and Clinical Approaches", published 2011 (Springer). The latter is the first textbook devoted entirely to the subject of nocturia. He is a member of numerous professional societies, including the International Continence Society, the Society for Urodynamics and has been Governor for the American College of Surgeons for the NYC area as well as District II representative board member to the New York Section of the American Urological Association. Dr. Weiss is currently engaged in research regarding the cause and treatment of nocturia, overactive bladder and prostate cancer. Dr. Weiss has refereed over 100 manuscript submissions for, among other, the Journal of Urology, Urology, British Journal of Urology International, and European Urology and has written numerous journal editorials. He received “Editorial Reviewer of the Year” honors from the Journal of Urology for Urodynamics and Female Urology in 2008, 2011 and 2013. He directs the Instructional Course on Nocturia at the AUA annual meeting and has been a plenary speaker on multiple occasions at the annual AUA meetings and well as panelist in multiple nocturia symposia at the AUA, ICS and EAU meetings. Dr. Weiss chaired the 2010 and 2012 Consensus Panels on Nocturia sponsored by the New England Research Institute and Boston University in Cambridge, MA as well as the Nocturia Think Tank sessions of the International Consultation on Incontinence-Research Society in Bristol, UK, 2011, 2013, 2014 and 2015. Dr. Weiss is past President of the Section of Urology of the New York Academy of Medicine and is past President, Brooklyn/Long Island Chapter, American College of Surgeons.<?xml:namespace prefix = "o" ns = "urn:schemas-microsoft-com:office:office" />