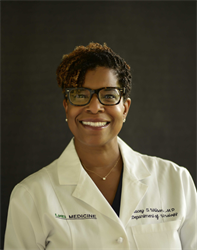 Dr. Tracey Small Wilson joined the UAB faculty in August 2008.  She completed her undergraduate studies at Georgetown University, obtaining a B.S. in Biology, and her medical education was obtained at Howard University College of Medicine in 1994.  She completed residency training in surgery and urology at the University of Connecticut in 2000.  She then sought additional training in female pelvic medicine and reconstructive surgery, thereby completing a fellowship at the University of Texas Southwestern Medical Center in 2002.  She became a diplomat of the American Board of Urology in 2005.

Upon completion of her formal training, Dr. Wilson returned to her roots, Boston, Massachusetts where she practiced in both the academic and private sectors.  She joined the faculty at UAB in August 2008 where her primary focus is on the assessment and treatment of voiding dysfunction in both men and women with an emphasis on incontinence, pelvic organ prolapse and neurogenic bladder.  She works closely with the geriatricians and urogynecologists at UAB to improve overall pelvic health disorders in women. Dr. Wilson is a co-investigator in the Pelvic Floor Disrders Network (PFDN) and The Urinary Incontinence Treatment Network (UITN).  She is involved in several multicenter NIH-sponsored trials as well as internally funded activities at UAB. She has written several book chapters and multiple peer-reviewed articles on female urinary incontinence and interstitial cystitis.