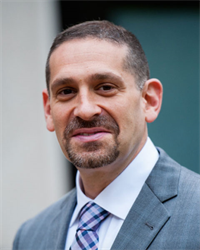 Dr. Michael Ost, MD MBA, Professor of Urology, Chief Surgical Integration Officer of Children's Hospital of West Virginia University received his Undergraduate degree from the University of Michigan, his Medical Degree from the The Mount Sinai School of Medicine in New York City, and  his MBA from the Ross School of Business at the University of Michigan. After completing his Urology training at the Mount Sinai School of Medicine, he became the first urologist in the United States to complete fellowships in Endourology (Northwell Smith Urology Institute, NY) and Pediatric Urology (CHP of UPMC) in order to treat the entire spectrum of urologic disease in a minimally invasive fashion; he specializes in the surgical treatment of congenital renal abnormalities, renal tumors, and complex stone disease. Prior to his move to West Virginia, he served as the Chief of Pediatric Urology at the Children’s Hospital of Pittsburgh of the University of Pittsburgh Medical Center (CHP of UPMC) where he built the division to include 5 Pediatric Urologists, 4 Advanced Practice Providers (APP), 3 specialty nurses, and 2 pediatric urology fellows. His division consistently ranked in the top 15 for Pediatric Urology in US News and World Reports. At UPMC he also served in the role of Vice Chairman, Department of Urology. He has taught numerous courses around the world on Minimally Invasive Surgery (MIS) in children and adults. He is the primary author of, “Robotic and Laparoscopic Reconstructive Surgery in Children and Adults”, and is the principle author of approximately thirty book chapters and over 75 articles published in peer-reviewed journals. Visiting professorships have included the John Duckett Pediatric Urology Lectureship in April 2017 at the University of Michigan Medical Center, Department of Urology.

Return to Oral Board Review Course (2019)